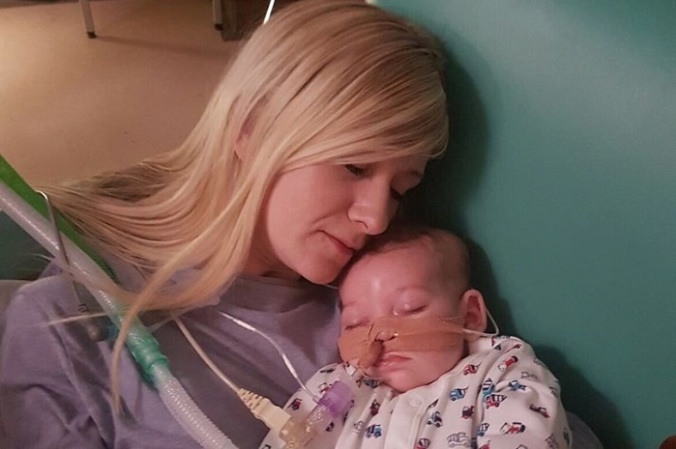 The parents of terminally-ill infant Charlie Gard have given up their fight to keep him alive.  They say that even if the experimental treatment for Charlie’s condition could be administered, it would come too late.  They now face the most difficult task of any parent in the world. They must wait for their child to die, helpless to do anything about it.

This marks the end of a tremendous and frustrating ordeal for this family. They struggled against the court system of Great Britain and the doctors who said there was no hope for Charlie. However, no one will ever know if this new, experimental treatment would have worked. The delays and demagoguery of the system robbed Charlie of any chance to live.

A court hearing last Friday, July 21, 2017 seems to have provided the proverbial “straw that broke the camel’s back,” for Charlie’s parents. They were delivered the news about the first brain scan of Charlie, and it wasn’t good. In fact, the doctors at the Great Ormond Street Hospital said it was a “sad reading.”

On Friday, Charlie Gard’s parents had enough and they stormed out of a courtroom after a lawyer for the hospital that is refusing to allow them to transfer Charlie to another country said that a new scan of Charlie’s brain is “sad reading.” The hospital made the scan available to the court before Charlie’s parents had a chance to view it.

Why Does This Matter?

This began when Charlie’s parents discovered a few months after his birth that he had an extremely rare genetic disorder. This disorder caused his mitochondrial DNA to be destroyed, and there was no current treatment to stop the progress of his deadly condition.

The parents became aware of an experimental treatment available in the United States. They had several hurdles to acquiring the treatment which were almost all miraculously overcome. The enormous cost of the treatment was an obstacle surmounted by the generosity of thousands of people to a gofundme page. Over 1.5 million dollars was raised, which was more than enough to pay for everything.

The Trump administration and Congress both extended a hand of hope to the parents. An invitation to bring Charlie to the U.S. for treatment was extended. Congress passed legislation to make the family temporary residents of the U.S. for this to happen. A private New York hospital opened its doors to welcome Charlie.

Yet, even when the British government did not have to pay for the treatment under their single-payer system, they refused to allow Charlie’s parents to have custody of their son. Rather, they determined that they know better than the parents and were not going to give up power over them.

Government Should Not Be In the Healthcare Business

This is also a prime example of why government should not be in the healthcare business. It should be a lesson not only for the British citizenry, but for the people of the United States as well.

Currently the U.S is embroiled in a federal debate about healthcare. The debate itself is ignoring the failure of the nation in its two attempts at healthcare control. Most know about the multiple failures of Obamacare. The promises of the former president and his supporters have all flown away with the wind of actual experience. By any impartial measure Obamacare is a colossal failure.

Yet there is a healthcare system run by the U.S. government which was largely ignored when Obamacare was first proposed and debated. The Veteran’s Administration has been a boondoggle operation which showed its flaws openly during the Obama administration. This federal program resulted in not simply waste, but fraud which led to the deaths of sick veterans.

Ironically, it is the efforts of the VA under Trump to remove the hands of the government from the VA which is beginning to result in better care for veterans. It is hoped that Trump will take this in consideration. If he does, the conclusion should be that government needs to get out of the healthcare business by just repealing Obamacare, and not try to replace it.

One thought on “Charlie Gard’s Fight is Over [updated]”