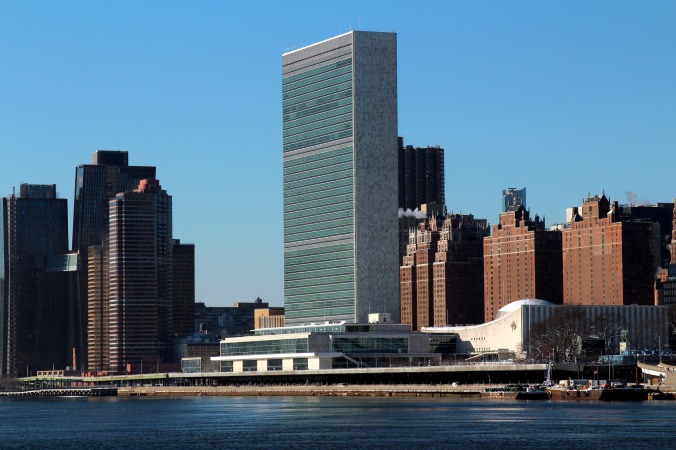 Woe to those who call evil good and good evil, who put darkness for light and light for darkness, who put bitter for sweet and sweet for bitter! [Isaiah 5:20 ESV]

President Donald Trump addressed the United Nations for the first time on September 20, 2017. It has been noted that the first impression one makes is the most important. Everyone in the UN General Assembly who heard that speech received quite a first impression of Trump. Whether or not they liked the speech, one thing is certain, none will soon forget it.

Trump spoke some hard truths to the U.N. that day, as noted in part one and part two of this series. The president also directly addressed the problem of the cost of operating the UN. The United States bears the largest share of the cost by far. The rest of the world needs to step up. As Trump knows, we cannot afford to keep footing the bill for the U.N.

America Is Footing the Bill

The United States provides far more funds to the U.N. than any other of the 193 member nations. The latest figures show at least a $5 billion dollar investment in “peacekeeping” and a provision of 22% of the U.N. budget. The United States also provides the U.N.with building space in New York for its headquarters. How has our nation, and the nations of the world, benefited from such a large investment? We haven’t. In fact, we have essentially paid the U.N. to make things worse for us and the world.

An early example of this was the Bangladesh liberation war and the 1971 Bangladesh atrocities committed by the Pakistan Army on Bengali Hindus.  The UN was totally inept and could not prevent the genocide. In fact, only military intervention by India stopped the mass murder. By the time it was through, some 300,000 to 500,000 Bengali were dead, and about 400,000 women had been victims of “a systematic campaign of genocidal rape.”

In the 21st century, the most prominent and dramatic example is the War in Darfur, in which Arab Janjaweed militias, supported by the Sudanese government, committed repeated acts of ethnic cleansing and genocide against the indigenous population. Thus far, an estimated 300,000 civilians have been killed in what is the largest case of mass murder in the history of the region, yet the UN has continuously failed to act against this severe and ongoing human rights issue.

What about the Arab-Israeli conflict in the Middle East? This is arguably the hottest of hot spots for violence in the world. Here is a prime chance for effective, peaceful involvement by the U.N. Yet the U.N. has regularly and solely taken to criticizing Israel and supporting the Arab/PLO side in any conflict!

According to Robert S. Wistrich

a third of all critical resolutions passed by [the UN] Human Rights Commission during the past forty years have been directed exclusively at Israel. By way of comparison, there has not been a single resolution even mentioning the massive violations of human rights in China, Russia, North Korea, Cuba, Saudi Arabia, Syria, or Zimbabwe.

Can anyone actually believe that Israel is worse concerning human rights than North Korea? The UN has also regularly criticized its biggest benefactor, the United States, for “human rights” violations all the while having nations such as Libya, a real rights violator, as the head of their Human Rights Commission! A recent example of this is a UN adviser to the Human Rights Commission who blamed the Boston bombings on America!

It can get even worse when the UN intervenes with its “peacekeeping” forces.

In the 1996 UN study The Impact of Armed Conflict on Children, former first lady of Mozambique Graça Machel documented: “In 6 out of 12 country studies on sexual exploitation of children in situations of armed conflict prepared for the present report, the arrival of peacekeeping troops has been associated with a rapid rise in child prostitution.” …In 2011, a United Nations spokesman confirmed 16 Beninese peacekeepers were barred from serving with them because they failed to maintain an environment that prevents sexual exploitation and abuse. Sexual misconduct by United Nations troops had earlier been reported in Congo, Cambodia, and Haiti, as well as in an earlier incident involving Moroccan peacekeepers in Côte d’Ivoire.

If the world cannot trust the U.N. to help, rather than harm, when needed, then the U.N. has lost all credibility. Without international credibility, the U.N. cannot be effective. That would be so even if they operated ethically and efficiently. If those who profess to bring peace instead destroy the children, they have lost all semblance of decency and should be eliminated.

The Disturbing Future Vision of the UN

If the past and present state of the U.N. isn’t bad enough, their disturbing future vision is the appalling Agenda 21. This is a global plan to achieve what they call “sustainable development” throughout the world.

In the afterword of Glen Beck’s novel Agenda 21, Beck goes into the actual statements of the U.N. about the program:

Agenda 21 is a comprehensive plan of action to be taken globally, nationally, and locally by organizations of the United Nations System, Governments, and Major Groups in every area in which humans impact on the environment.

In order to accomplish this plan, Agenda 21 has an aggressive agenda. Beck boils it down to nine actions that:

This is a future society run by elite socialists who exercise control over the populace. They seek to reach “sustainability” on earth by reducing the population and prosperity of everyone else. It is a bleak world vision of the masses in socialist eco-slavery.

The Way Forward After the UN

The U.N. might be slowed in the rush to globalist domination while the Trump administration is in power. However, that will only delay the inevitable. A march toward a socialist nightmare under the U.N. will be attempted. Those who wish to achieve the coveted “sustainability” for the planet will not give up.

The better path is to withdraw our membership from this corrupt and harmful organization. The U.N. should then be evicted from the building and it should be rented out for prime office space. At least something productive might come from that location, rather than the dangerous Marxist rhetoric and schemes of the U.N. we have today.

9 thoughts on “The UN and the End of a Road Paved with Good Intentions, Part 3”