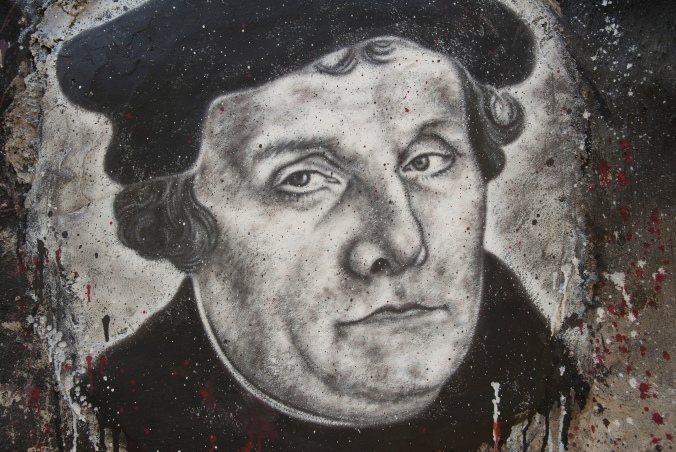 For I am not ashamed of the gospel, because it is God’s power for salvation to everyone who believes first to the Jew, and also to the Greek. For in it God’s righteousness is revealed from faith to faith, just as it is written: The righteous will live by faith [Romans 1:16,17 HCSB]

This October 31, 2017, is a special and historic day. Unfortunately, the majority of people inhabiting this floating rock in space will pass it wrapped in ignorance about the day itself. That is because I am not talking about Halloween. I am talking about the 500th anniversary of one particular event which launched a movement that changed history.

It was October 31, 1517, when an obscure monk named Martin Luther nailed his “95 Theses” to the doors of the Church at Wittenburg, exposing some of the grave biblical errors of the Catholic church at the time. That single act was the catalyst to change Western Civilization forever.

Martin Luther did not set out to become the first ‘protestant’ leader in the world. In fact, he began his spiritual journey to Christ while studying to be a lawyer. He came from a poor but industrious family and was thoroughly indoctrinated in the teachings of the Roman Catholic Church as a child.

He attended university and at the tender age of 21, he began his studies of the law. He looked to be headed to a lucrative career as a lawyer. However, after just two months of school:

When a bolt of lightening knocked him to the ground and nearly took his life, Luther cried to the patron saint of the miners of his youth: “St. Anne help! I will become a monk!”

This abrupt change in career did not please his father. He had been hoping young Martin would be a successful enough to provide for the family in his old age. The life of a monk would never give financial security for any of the Luther clan.

Luther entered the monastic life hoping to find some assurance of salvation through the discipline of the monastery. He threw himself headlong toward that goal, surpassing even the most dedicated of pilgrims. Yet, Luther failed to find any peace. In fact, he was tortured by the terror of God even as he sought approval from God.

Martin Luther had grown up in an era where God was most often portrayed as a punishing and fearful figure of judgment. He feared God’s anger toward him as a sinner. Because of that fear, Luther subjected himself to far more stringent discipline than even the harshness of the Augustinian Order required.

He mortified [i.e. whipping himself] his body. He fasted, sometimes for days on end and without a morsel of food. He gave himself to prayers and vigils beyond those required by his order. He went to confession, often daily and for hours at a time

His habit of confessing even the smallest things for many hours irritated his fellow monks and teachers. It was reported that once Luther stayed outside in the snow the entire night in prayer.

Yet there was no peace in his soul. Upon one occasion when he was asked if he loved God, Luther shot back,

Love God? You ask me if I love God? Sometimes, I hate God!

The Light of The Gospel Dawns

Despite Luther’s doubting and fearful conception of God, he was an excellent student and scholar. He was assigned by his superiors to a teaching position in theology at the University of Wittenberg. It was during this time while lecturing on the book of Romans in the New Testament when Luther was suddenly struck by the phrase at the end of verse 17 of the first chapter, “the just shall live by faith.”

This declaration revealed to Luther that his striving to be right with God was a fool’s errand. He realized that one could only be justified as righteous before God by relying completely upon faith in Christ and not by any work of man. This was a source of peace beyond comprehension for Luther. It was the light of the good news, the gospel of Jesus Christ, dawning in his heart.

Immediately Luther began to spread this gospel light in his teaching and especially through his writings. He flooded Germany and eventually all of Europe with books and pamphlets to the common people which taught the doctrine that became the central theme of the Reformation. It was that salvation came through “justification by grace alone through faith alone in Christ alone to the glory of God alone.”

This was revolutionary and anathema to the Roman Catholic teachings of the day. Of course, this made Luther a mortal enemy of the Catholic Church.

The Moment of Truth

The Roman Catholic Church of that era was the recognized authority over all of Europe. The Lords and Kings of that time were all, at least outwardly, subservient to the Pope in Rome. In fact, the majority of the European continent was then called the “Holy Roman Empire.” It was all of the worldly power of the age aligned against the lone monk, or so it seemed.

Luther’s agitation of the ‘establishment’ led to serious consequences. He had posted his “95 Theses” as an invitation to debate specifically the practice of selling ‘indulgences’ by priests to the common people. The ‘indulgences’ were pieces of paper which claimed to release loved ones who had died from suffering in purgatory and absolving the holder of their sins as well.

Astonishingly, the ninety-five theses were translated into German and spread rapidly without Luther’s knowledge. They became an immediate sensation throughout the land. This threatened the profit being made by the Church through selling indulgences. He was called to appear at the Imperial Diet of Worms before the emperor, King Charles V, and various Catholic scholars.

“Here I Stand, I Cannot Do Otherwise”

His friends warned him not to go, fearing he would be burned at the stake as other would-be reformers had been before him. Luther had not yet broken away from the Roman Catholic Church. He was still trying to reform it and believed the Pope would realize these errors and practices eventually and needed changes would come.

Luther came into the hall at Worms not only in front of the authorities. Luther’s fame had so spread that there were thousands in attendance. He saw a large table upon which were piled many of his writings. Luther was asked, “Are these your books?” He responded that they were his books. Then the crucial question came. “Do you recant?” meaning that he was to disavow his writings against the practices of the church.

Luther felt fear for his own life grow in his heart. He asked for 24 hours to consider his answer. He spent the entire time in prayer. The next day he was asked again, “Do you recant?” After some bantering about the nature of the books, Luther paused before he answered.

Unless I am convinced by sacred Scripture or evident reason, I cannot and I will not recant. My conscience is held captive by the Word of God. To act against conscience is neither right nor safe. Here I stand, I cannot do otherwise.

He was given 20 days to recant or burn. Almost miraculously, a group of supporters helped him escape from Worms and took him to safety. Soon afterward, the first non-Catholic church since the fall of the Roman Empire over a thousand years before came into being, and the Protestant Reformation was born.

Time For A ‘New’ Reformation?

The Reformation resulted in a rediscovery of the gospel of grace, and the creation of a multitude of denominations such as Lutherans, Presbyterians, Baptists, Methodists and so on. It also resulted in what Luther had envisioned in the first place, a reformation within the Catholic church in response.

Sadly, since that time 500 years ago, both Catholics and Protestants in most of their manifestations have moved far away from the rediscovery of the gospel which impelled the Reformation.

Perhaps it is time for a “new Reformation,” in Christendom. A time to deeply study and act in response to Word of God and the offer of salvation by grace through faith in Christ. A time to walk and live and proclaim, like Luther that our “conscience is held captive to the Word of God.” If the body of Christ in the churches today would take hold of that declaration in their hearts, we might be witness to an awakening to God’s glory and grace. I pray it would be so.