There has been a bundle of recent news about the incredibly positive direction of the American economy under the tutelage of President Donald Trump. What? You haven’t heard? Other than tweets from the president, that is.

Rest assured, both the economic success and the stories about it exist. Both those stories which misinterpret, mislabel, and misinform, and those which deal with the facts and the numbers supporting them.

Additionally, the real news and correct analysis can be found and is being found, by those who look in the right places. How can one know if the news in real?

Perhaps the most startling success in the area of the Trump trade policy is the new trade agreement with Mexico. The benefits of this deal for the United States are breathtaking.

Most pundits and leftist economists thought this couldn’t be done. Columnist Wayne Allen Root weighs in on the new agreement.

A ‘side’ benefit of this deal is suggested by Root. He believes that these savings could be thought of as a way for Trump to fulfill his statement that Mexico would end up paying for the border wall.

Another recent occurrence of good news has been the announcement that last month’s GDP figures had to be revised upward. The number went from a great 4.1 to a magnificent 4.2 percent growth in Gross Domestic Product.

Economic indicators have shown us that the U.S. economy grew at 4.2-percent in the 2nd quarter of 2018, having been revised up from the original estimate of 4.1-percent. The U.S. economy is the strongest it has been in four years. The Atlanta Fed is predicting the possibility of hitting 5-percent GDP growth in the 3rd quarter (July – September).

GDP is a measure of the economic productivity of the nation. The greater the numbers, the higher the productivity.

The higher productivity indicates both an increase in supply as well as an increase in expected demand for products from American businesses. This reinforces other economic indicators, such as the record-breaking stock market gains since the 2016 election.

When President Trump was on the campaign trail he made a promise to eliminate the excessive regulations imposed by the government. His promise was that for every regulation enacted two regulations had to be removed.

Trump has more than delivered on that promise.

During the first year, for every regulation enacted there were 22 regulations removed! That amounted to a reduction of 33,944 pages from the 2016 Federal Register.

The economic impact of this cannot be over-estimated. This crucial measure in the course of Trump’s presidency could save more than a trillion dollars each year! That holds true if the president reaches merely half of his goal.

He believes that the government can reduce its regulations by as much as 75%. The cost of enacting and enforcing federal regulations reached almost 2 trillion (yes with a ‘t’ which is 1,000 billion dollars) in 2015.

The Competitive Enterprise’s (CEI) ninth annual Ten Thousand Commandments report claims the federal government issued 80,260 pages of rules in 2015. …The price tag for all these rules adds up to 1.88 trillion…

The Success of the Tax Cuts 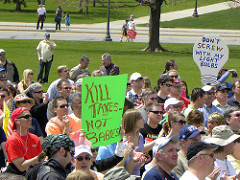 President Trump’s most ballyhooed economic measure was the new law enacting large tax cuts for Americans signed in December of 2017. The cuts rang up to a huge 1.5 trillion in total tax reduction, the largest cut in dollar amount ever.

How has this affected the economic climate? The results as of January 2018, less than a month after the cuts became law, have been very encouraging. Even Bloomberg’s analysts have had to admit it, and they are certainly not supporters of the president.

Since Republican leaders pushed through their once-in-a-generation tax overhaul, more than 70 major U.S. companies — including Wal-Mart Stores Inc., Apple Inc. and JPMorgan Chase & Co. — have announced either pay raises or bonuses for rank-and-file employees, or more hiring and investment.

I can tell the readers from personal experience at my other full-time job that just weeks after the tax cuts, all employees were given an extra $1,200 bonus. This was on top of a generous holiday bonus of $1,000.

Additionally, every employee was given a dollar or more hourly raise beginning in 2018, and the entry-level wage was raised by almost two dollars per hour.

I have been employed at my current position for over 12 years. This is the first time there have been extra bonuses paid out to everyone. It is also the first time I received a pay raise that was even close to a dollar an hour.

The expansion of the job market has been another smash hit for the Trump economy. The overall numbers have exceeded expectations for both numbers of people employed and for the falling unemployment rate.

Since January of 2017 through July of 2018, the Bureau of Labor Statistics shows a gain of a little over 3.5 million non-farm jobs in the United States. This gain is across the board.

The unemployment figures are particularly noteworthy. Unemployment has dropped dramatically in the United States.

Moreover, these low numbers are reaching record or near-record levels in all parts of the population. For example, the president highlighted these focusing on the newest figures for black unemployment in his State of the Union address.

“Unemployment claims have hit a 45-year low,” Trump said during his State of the Union address in February. “It’s something I’m very proud of. African-American unemployment stands at the lowest rate ever recorded.”

A Successful Rejuvenation of Business and Industry

This is one of the topics President Trump truly enjoys talking about. While he was on the campaign trail in 2016, Trump often spoke of bringing jobs back to America that had left under previous administrations.

Candidate Trump was roundly criticized for making that promise. One of the most famous critiques was given by then President Obama on PBS in 2016.

Here is some of what the president had to say about the rejuvenation of business in the country back in February of 2018.

“Many car companies are now building and expanding plants in the United States, something we haven’t seen for decades. Chrysler is moving a major plant from Mexico to Michigan, Toyota and Mazda are opening up a plant in Alabama. Soon, plants will be opening up all over the country. This is all news Americans are unaccustomed to hearing…” Trump added that other companies were investing in the U.S. “Apple has just announced it plans to invest a total of $350 billion in America, and hire another 20,000 workers,” he said and added that on Monday, ExxonMobil announced that it will pour $50 billion into expanding operations in the U.S.

It would appear that President Trump found the ‘magic wand’ that Obama said he needed to bring jobs back.

A Successful Revival of Economic Hope

Hope can be a difficult factor to measure. However, in economic terms, hope is measured in large part by surveying consumer confidence for a certain period.

According to Reuters news service, this measurement is on a meteoric rise.

U.S. consumer confidence surged to near an 18-year high in August, as households remained upbeat on the labor market, pointing to strong consumer spending that should help to sustain the economy for the remainder of the year.

The ‘surge’ in confidence reflects a renewal of economic hope among Americans. This renewal has been triggered by the actual experiences of consumers in everyday life.

The average consumer has gained great confidence and hope for their own future because of what they see in their own communities. This personal testimony beautifully illustrates this revival of hope.

There is something good to be said about a reinvigoration of economic hope. President Trump’s policies have begun this process and I pray prosperity will continue to bloom in America.

However, the ultimate hope for America and the world is found in the grace of the LORD Jesus Christ. It is obtained one person at a time by trusting all of life to His guidance and care and being redeemed by faith in Him.

If your hope is solidly in Him, even a terrible economic outlook can be dealt with and your soul will prosper in the best possible way.

Our soul waits for the LORD; he is our help and our shield. For our heart is glad in him, because we trust in his holy name. Let your steadfast love, O LORD, be upon us, even as we hope in you. Psalm 33:20-22 [ESV]

9 thoughts on “Seven Spectacular Successes of the Trump Economy [Video]”