In recent weeks the political landscape of America has been imbued with talk of a “crisis” of one type or another. On the one hand, there is the crisis on the southern border, as President Trump and the sensible among the GOP claim.

On the other hand, there is the crisis of “climate change,” championed by the new extreme Left of the Democratic Congress. Which of these claims holds up under investigation of the facts?

Just what is the real crisis for America? To parrot an ancient TV game show, “Will the Real Crisis Please Stand Up?” 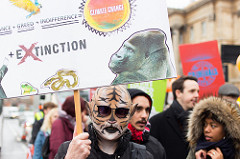 The newest offering wholeheartedly embraced by just about every Democrat running for the 2020 presidential nomination is the so-called ‘Green New Deal.‘ This Socialistic monstrosity is offered in response to what is uniformly mimicked on the Left as an “existential crisis” which will end the planet in a decade.

However, as this journal and a multitude of others have repeatedly shown, “climate change” is unproven as a fact, or as a real threat. It is essentially a hoax designed to enrich its supporters with zero evidence to support the theory.

To be clear, yes, the climate is changing now. It has changed from yesterday and will change to a different climate tomorrow.

The climate all around the globe changes constantly and has done so since the planet came to exist. There is a special name for that phenomenon; it’s called “weather.”

The panic has been renewed with a vengeance by new congressional Rep. Alexandria Ocasio-Cortez and her supporters on Capitol Hill. The threat is said to be both real and immediate so that we have but 10 years to reign it in.

If that were true, then there would be a “catastrophic” crisis facing humanity which deserved our attention. However, the truth reveals no real crisis exists.

For others on the Left, “climate change” is about self-aggrandizement with both money and power. For those people, the welfare of the planet is the least of their concerns.

Those among the Left who wish to enrich themselves monetarily are the “scientists,” who grab a large portion of around $2 billion in public funding. They receive the preferred government grants for their projects in only if the ‘climate change’ mantra is followed.

There are others on the political Left and their supporters whose greatest concern is gaining power through the “climate change” fraud. Their wish is to transform America into a Socialist regime with them at the helm.

The other national crisis claim is far more specific and has real evidence to support its contentions. The crisis on the southern border is specific in location and threat.

The threat is no less than that of an enemy invasion of the nation. The sheer numbers involved are ample evidence of the accuracy of this assertion.

Moreover, the fact that multiple waves of “immigrant caravans” keep coming toward the southern border in the thousands shows this is an invasion. Another “caravan” of potential illegal aliens is headed toward the border at this moment, and it is reported to be the largest contingent so far.

The last encounter with such a flood of people trying to illegally enter the United States was revealing.

The behavior of the first “caravan” illustrates that those who have claimed the situation at the border is a “manufactured crisis,” have no clue what they are talking about. Here is some data from the Department of Homeland Security about the composition of that attempt to break into the United States.

Department of Homeland Security officials report that nearly 300 members of the migrant caravans en route to the U.S. at this time are either convicted criminals or known gang members. The criminals include individuals with convictions for sexual assault on a child, aggravated assault with a deadly weapon, armed robbery, and assault on a female, officials reported.

Moreover, the invaders are not simply coming from Mexico or Central America. There are many from other nations that may not be so kindly disposed to America and her citizens.

Mexican officials have also publicly stated that criminal groups have infiltrated the caravan. We also continue to see individuals from over 20 countries in this flow from countries such as Somalia, India, Haiti, Afghanistan, and Bangladesh.

Add to this the situations Americans have to deal with concerning ‘sanctuary cities,’ such as San Francisco and whole ‘sanctuary states’ like California. Many of the people they protect from those horrible Immigration and Customs Enforcement, or ICE, officers, have been deported multiple times and go on to commit heinous crimes, including murder.

Then there is the rampant gang violence associated with large gangs such as MS13. They are at the forefront of terrorizing whole communities with the horrific acts they perpetuate.

MS13 was organized in Los Angeles during the 1080s by illegal aliens from El Salvador.

It has expanded since to include Hondurans, Guatemalans, Mexicans and other Central and South Americans. MS-13’s motto is “mata, viola, controla” – which means “kill, rape, control,” according to Robert Hur, an official with the Justice Department. …They seek to live up to this motto through truly shocking acts of violence designed to instill fear: vicious machete attacks, execution-style gunshots, gang rape and human trafficking.” 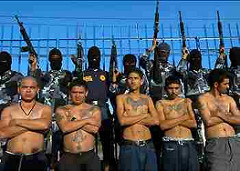 The current ‘caravans’ are coming from those countries where MS13 is much larger and more powerful than the numbers in America at present. The aim of those who are gang members from south of the border is to swell their ranks in this country and spread lawlessness and violence.

This brief assessment of the immigration crisis doesn’t include the problems of human trafficking and the flood of dangerous drugs from the cartels which lax border enforcement and the lack of a wall enable. Those two alone would constitute a humanitarian crisis which desperately needs attention.

The Real Crisis Is Not Being Addressed Adequately

It is evident that the actual crisis is occurring with America’s illegal immigration invasion, not in the mythical claims of ‘climate change’ watermelon [i.e. ‘green on the outside and red on the inside’] politicians. It is also evident that with few exceptions, the only political person concerned with addressing the immigration crisis is President Trump.

The policy that garners the greatest attention is, of course, the promised border wall to help curb the invasion of illegals. This is a gigantic step which is very needed and will reap significant benefits, however, a physical barrier is only a piece of the necessary solution.

President Trump has called for increased law enforcement personnel and additional technology to help halt the border crisis. These measures would be an enormous help, but the congressional response from the Left, and in part from disgruntled GOPers, has been to ignore the problem.

Friday, Feb. 15, 2019, the president announced that he would be officially declaring an emergency on the border, along with signing a woefully inadequate spending bill that provides about 1.4 billion for the wall. This declaration will be challenged in court, as the president noted, but he also says it needed to be done anyway, in order to secure some wall funding.

The president received anemic support from the timid Republicans for immigration reform and a wall in the first two years of his term, and during the recent government shutdown. Those considerations may have led to the reluctant signing of the spending bill, especially since its provisions further enable illegal immigrants to take greater advantage of the asylum laws in America.

The continued weakness in our laws that grant asylum to the United States is not addressed in the spending bill. That is, in my opinion, a terrible mistake which will exacerbate the problems of the immigration crisis.

Currently, the law allows automatic legal status as an asylum-seeker if the immigrant party claims a “credible fear” from their home country and they have made it onto U.S. soil. This creates a huge problem because each person granted such status has to have it adjudicated for authenticity.

Thus, the asylum-seeker is given a document with a court date, months in the future, at which they are to appear for an asylum hearing. Over 90% of those people do not show up for their day in court and are at that time no longer asylum-seekers, but illegal aliens.

These people then come under the jurisdiction of ICE. Those who can be caught are held in ICE detention centers around the country.

Mark Morgan, the former head of the Border Patrol under the Obama administration, gave some startling statistics on the ICE detention situation as it presently stands. While being interviewed on “The Buck Sexton Show” podcast of Feb. 13, Morgan said,

Right now ICE has 49,000 people in detention. 87% of them have been convicted of a crime, or charged with a crime, or are a suspected gang member.

As Sexton points out, overwhelmingly these are people charged with crimes in addition to their status as an illegal alien. Remember, they are just those who have been caught and detained, and there is no real way to account for the others who are shielded by sanctuary policies or simply disappear into the population.

President Trump cannot change the current asylum laws by executive authority, but he is trying to do what he legally can accomplish. It is long past time the Congress, especially the Democrats, honored their previous pledges and votes for real border security including a physical barrier, and to fix the inadequate laws concerning asylum-seekers.

Contrary to the rantings of Ocasio-Cortez and her compatriots, there is no inherent human right to come to the United States. Moreover, her claims that no one of Latin descent should be refused entry to America because they are descendants of native peoples are ignorant of the Constitution and history.

5 thoughts on “Which Is The Real Crisis for America? [Video]”