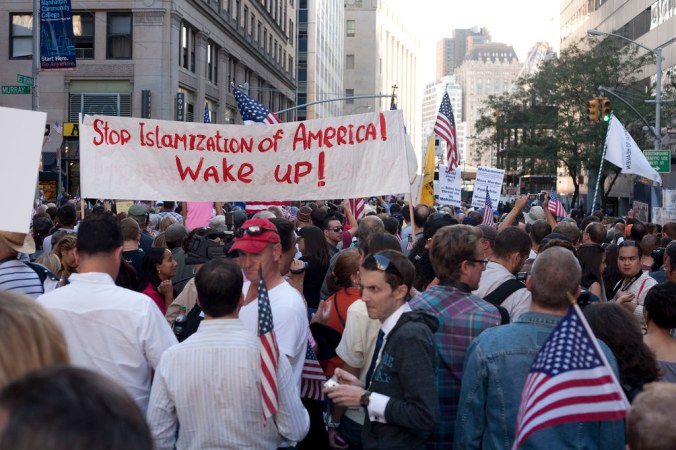 Much has been written here and elsewhere about the many detrimental elements that the 2019 crop of Democratic congressional rookies have brought to American society. However, there is at least one somewhat positive service these neophytes have done for the public, they have visibly revealed the mind of the activist Left.

One of the more troubling revelations that have come to light is the political and societal alliance between the far Left and Islamofascists in the United States. No, there isn’t a formal written agreement between the two groups, nor could there be one that truly states the intentions of either party, as will be seen.

However, each of these ‘movements’ has something to gain through cooperation in their fight against a common foe, the traditional, conservative Judeo-Christian society of the West. Whatever differences they may have they are unified in this immediate goal.

The political alliance of the Left with Islamofascism in America began immediately following the terrorist attacks of September 11, 2001, and the opportunity was unwittingly provided by former President George W. Bush. In a speech six days after 9/11, Bush declared that,

The face of terror is not the true faith of Islam. That’s not what Islam is all about. Islam is peace.

The naivety of President Bush was a denial of the brutal history of Islamic Jihad and its resurgence in modern times. Yet the refrain that “Islam is a religion of peace,” became the moral pedestal for the Left to the present day.

Most political conservatives at that time were approving of Bush’s call for tolerance out of a sense of solidarity and the inherent conservative tendency to place blame for evil acts on the individual perpetrators. The other side of that coin is conservatives, in general, tend to trust others until given a good reason not to trust them.

During the remainder of the Bush presidency, Islamic terrorists focused on America’s efforts in Afghanistan and Iraq, and the homefront was relatively quiet. However, that situation began to change after the ascension of Barak Obama to the Oval Office.

One of the first actions President Obama took after his inauguration was to embark upon what became known as his ‘apology tour,’ in various countries. During that international speaking jaunt, Obama routinely degraded American policy, both with dictators in places such as Cuba, and shamed our conduct of the ‘war on terror’ in Islamic nations.

At the same time, Obama began to withdraw troops from Iraq, which quickly resulted in the rise of ISIS and their successive military conquests in the Middle East. This set the stage for the veil to be lifted on any pretense that our Commander in Chief and his cohorts were not aligning with radical Islamofascism against American interests.

The veil came off on September 11, 2012, at Benghazi, Libya. The Obama administration, in a strategic alliance with Islamic terrorism backed by Leftist political players including Secretary of State Hillary Clinton, covered up a clear Islamic attack on Americans by falsely blaming the attack on an internet video.

This horrible event cemented the troubling alliance between the political Left and Islamofascism. The stage was now set for a new crop of eager young Leftists and Muslim terror apologists to arrive in 2018.

The chief representative of the Left is, of course, the ever verbose Alexandria Ocasio-Cortez [D-NY]. The main apologist for Islamic terrorism is the slightly less infamous Representative Ilhan Omar [D-MN].

Rep. Omar has been featured in a previous article and the clear danger she poses to America was thoroughly outlined in that piece. However, there is another necessary element which supports the pernicious alliance between the Left and Islamofascism. That element is the Leftmedia.

The conglomerate of the Leftist media apparatus has shown unwavering support for the assault of Islamofascists upon Western civilization at every juncture, especially during Obama’s tenure. The pre-eminent example of this was the lack of honest coverage by the Leftmedia network outlets after the terrorist attack on Benghazi.

For the seventh night in a row, ABC’s World News, CBS Evening News, and NBC Nightly News refused to give one single second of coverage to the Obama administration’s deceitful response to the terrorist attack on the US consulate in Benghazi on September 11.

However, there are many other examples where Islamic terrorist attacks on American soil were downplayed or dismissed altogether. One prominent example that has faded from memory, especially if one is of the millennial generation, occurred in 2009 at my former military home base of Food Hood, Texas.

U.S. Army Major Nidal Malik Hasan went on a premeditated murderous rampage at Ft. Hood on November 5, 2009. As was later uncovered, Hasan was a sympathizer with Islamofascism groups and vocally declared his allegiance to Islamic Jihad as he shot and killed 13 American soldiers.

The response of the Leftmedia was to cover-up Hasan’s clear connections to Jihadists with every lame reason they could concoct including PTSD, though Hasan never served overseas. Prominent among the fables was the Left’s favorite screed of ‘racism’ directed against Hasan which caused him to kill his fellow soldiers.

Media outlets found another convenient motive that would fit its worldview — racist U.S. soldiers drove Hasan to kill. ABC News ran a story the day after the attack titled Nidal Malik Hasan, “Suspected Fort Hood Shooter, Was Called “Camel Jockey.” This allowed the media to ignore any relationship between the attack and Islam and blame it on “racist” U.S. military personnel.

Examples such as this abound including the Leftmedia. Another example is the media blaming conservative groups like the Tea Party for the Boston Marathon bombing in 2013.

On April 15, 2013, two pressure cooker bombs exploded during the Boston Marathon, killing 3 people and injuring 264. Before the scene was even cleared, many in the media had a suspect — the Tea Party. Chris Matthews and CNN’s Wolf Blitzer attached great significance to the fact that it was Patriots Day. Michael Moorealleged that the Tea Party was behind the bombing. CNN’s security analyst Peter Bergen “suggested more than once that a right wing extremist group could be behind the attacks.” 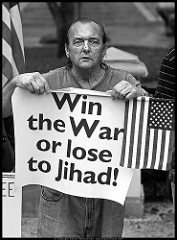 Fast forward to 2019 and the same Leftmedia apologists are busy excusing the anti-Semitism of Ilhan Omar. As a result of this support, the House of Representatives changed their mind about a critical resolution against anti-Semitism and instead passed a meaningless one which spoke against several categories of so-called ‘hate speech.’

Her recent characterization of 9/11 as “some people did something” rightly garnered harsh criticism. It also brought sympathetic support from some of her Democratic colleagues as well as those in the Leftmedia who said that outrage over this comment was phony and insisted the real problem was bigotry against Muslims.

This is a small sampling of the evidence that the Left in America is allied with those whose objective is to further Islamic Jihad. It is also but a fraction of the evidence seen around the globe, perhaps most notably in Europe over many decades.

Moreover, this strange alliance between the Left and Islamofascism involves one final serious participant. It is the Left wing of the ‘Christian Church’ around the globe, which will be examined in part two.

I have sent to you all my servants the prophets, sending them persistently, saying, ‘Turn now every one of you from his evil way, and amend your deeds, and do not go after other gods to serve them, and then you shall dwell in the land that I gave to you and your fathers.’ But you did not incline your ear or listen to me. Jeremiah 35:15 [ESV]

2 thoughts on “The Left and Islamofascism: A Strange and Troubling Alliance, Part One [Video]”