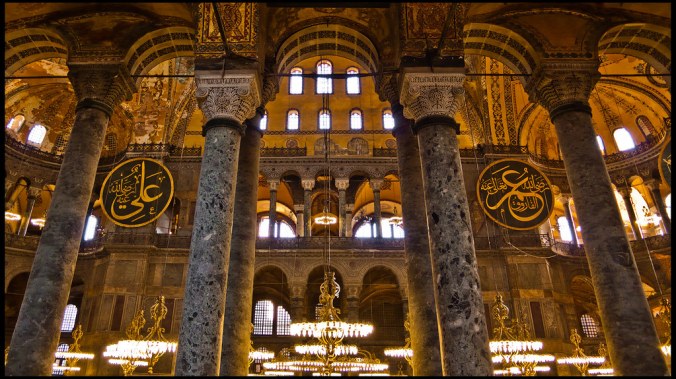 The second part of this series began the examination of the modern alliance between the Leftist ‘Christian’ church and Islamofascism by the embracing of both massive Muslim migration globally and of a rising anti-Semitism within the Leftist flock.

These churches have relied on a faulty theology which dismisses or reinterprets biblical instruction to fit a “social justice” agenda. This agenda works through a philosophy of ecumenism.

In short, ecumenism is the ideal of cooperation across the entire spectrum of Christian churches worldwide. For the Leftward churches, this has been expanded to attempt unity with many other religions.

Those church organizations that favor Leftism long ago jettisoned the Bible as the infallible guide for Christianity. This has enabled them to now falsely embrace Islam and Christianity as if both are sanctioned by Christ’s teaching.

Nothing could be further from the truth, as Jesus Himself states,

Jesus said to him, “I am the way, and the truth, and the life. No one comes to the Father except through me. John 14:6 [ESV]

In most such attempts, the process toward unity results in the Christian belief system being modified to “fit” the other faith and declare it as valid as Christianity, regardless of the severity of the differences. Thus, the Leftward church is now committing a final, fatal error by attempting to convince the world that Islam and Christianity are equally valid choices for anyone.

St. Peter’s Square at the Vatican

It is very disturbing that the Leftward churches are equating the Christian faith with Islam. Validating Islam as equal to Christianity began with the Catholic Church in the text of the Second Vatican Council in 1964.

The plan of salvation also includes those who acknowledge the Creator, in the first place among whom are the Muslims: these profess to hold the faith of Abraham, and together with us they adore the one, merciful God, mankind’s judge on the last day.

The Council acknowledges that Islam doesn’t recognize the divinity of Christ. However, that seems not to matter because further on in the same document they state,

Although not acknowledging him as God, they venerate Jesus as a prophet, his Virgin Mother they also honor, and even at times devoutly invoke.

The Divine nature of Jesus Christ is a non-negotiable doctrine for Christians. Therefore, despite the Council’s statement, Muslims do not ‘together with us adore the one, merciful God..’

Moreover, to be blunt, this ain’t what Jesus meant when He said,

And Jesus came and said to them, “All authority in heaven and on earth has been given to me. Go therefore and make disciples of all nations, baptizing them in the name of the Father and of the Son and of the Holy Spirit, teaching them to observe all that I have commanded you. And behold, I am with you always, to the end of the age.” Matthew 28:18-20 [ESV]

While I hold a Masters degree in Biblical Interpretation and Theology and it is helpful, no degrees are necessary to understand the biblical teaching that Christ the Incarnate Son of God is Divine. It is spelled out throughout the Word of God, as well as in the passage above.

Vatican II remains in place and the current Pope is rather sympathetic to Islam. Indeed,

Pope Francis received a noteworthy accolade in June when Ahmed al-Tayeb, the Grand Imam of Cairo’s al-Azhar, thanked him for his “defense of Islam against the accusation of violence and terrorism.”

However, lest the Catholic Church inaccurately receive all the blame, let us turn to the Protestant Left as represented by the World Council of Churches. As was noted in the previous articles, these churches have been very supportive of the Islamic immigration invasion in Europe.

Moreover, various Leftward Protestant groups are going further to favor Islam as a valid alternative to Christianity. For example, during 2016 in Germany, the overlord of the German Protestants made the proposal that classes on Islam should be required in all German state schools.

Note that this proposal is not introducing the idea of classes teaching Islam in Germany. The introduction of this dangerous policy came 11 years prior.

It was Wolfgang Schaüble, while interior minister in Angela Merkel’s administration, who first called for Islam to be taught in schools after declaring publicly for the first time that “Islam is part of Germany” in 2005.

The evolution of this idea eventually resulted in the incorporation of Islamic teaching in many places within Germany, with state universities prominently among them. Thus, in 2015 the process of taking Islam farther than just ‘a part’ of Germany to the goal of making Germany a majority Muslim nation.

Islam is now being incorporated into public school lesson plans and university disciplines all throughout Germany where religious groups and the state have always shared deep symbiotic relationships, the government has taken drastic measures to put Islam on the same legal footing as Christianity

The church and the government do not function independently within Germany. Thus, when ‘the government’ endeavors to ‘put Islam on the same legal footing as Christianity,‘ it is stating they are equally valid belief systems.

Another example from a European nation with exploding Muslim migration reaches back in time to the 2016 Islamic terror attack at the Charlie Hebdo magazine in France. The response to this terrorism was for European Catholic and Protestant group leaders to hold ‘interfaith’ services that yielded some heretofore unprecedented actions.

Islamic songs resonated in Florence’s Cathedral, the Church Santa Maria del Fiore. Under the famous Dome of Brunelleschi, Islamic melodies accompanied Christian ones. …[later] A priest in the south of Italy then enraged parishioners by dressing the Virgin Mary in a Muslim burqa for his church’s Christmas nativity scene.

No, dear reader, that was not a misquote, a Catholic priest dressed the Virgin Mary in a burqa! Another priest in Italy simply eliminated the nativity scene altogether to avoid upsetting Muslims.

In the Protestant camp, the Anglican Church in the U.K. had its own idea, while American Left-leaning churches are warming up to Islam as well. Think of how absurd the following suggestion by an Anglican Bishop in 2014 would have sounded just a few years before.

In the UK, Bishop Harries suggested that Prince Charles’s coronation service should open with a reading from the Koran. In the US, more than 50 churches, including the Washington National Cathedral, hold Koran readings.

It almost goes without saying that such incorporation of Christianity with Islam in Mosques around the world is nil. In other words, there are probably no readings of the Bible nor singing of Christian hymns is Islamic places of worship.

During a 2017 presentation in the U.S., cited in part two of this series, representatives of CAIR and the United Church of Christ pled with Christians, Muslims, and Jews for more unity between Islam, Judaism, and Christianity. This might appear to be a surprising development, however, it shouldn’t be that much of a shock,

…given the UCC’s cooperation nationally with CAIR, such as in co-production of a 90-second video on interfaith relations between a Jewish rabbi, a Christian pastor, and a Muslim imam. The clergy trade places in their houses of worship (although the female rabbi preaches in a church, not a mosque) and discuss a common “commitment to the Ten Commandments” and the “importance of marriage and the family.” The video does not discuss Muslim views of the UCC’s commitment to LGBT agendas like same-sex “marriage” or Jewish and Christian views of Muslim polygamy.

The Anglican Church, the German Protestants, and the UCC are not alone in equivocating Islam and Christianity. They are but the tip of the iceberg among Leftward Protestants.

This three-fold embrace of Islamofascism by the Leftward Church combines with the strange alliance of both governments and the media to effectively enable attempts to elevate Islam and Sharia law to pre-eminence worldwide.

It should be apparent that when one group infiltrates the government, the media, and the church in society, total domination of that society is the goal. It is but a small step from there to the Jihadist wish of Muslim rule coming true.

The Left is straining to defend Islamofascism worldwide in an attempt to both validate its false sense of ‘tolerance’ and unite against its despised Judeo-Christian foes. If their stated support for Islamic invasion should continue, a ‘victory’ for the Left might not be what they expected.

Once Islam becomes the most numerous faith, it becomes the most powerful faith in a country. When that happens, the Islamic agenda no longer needs to tolerate Leftism and their former ‘allies’ will cast them down with everyone else under the heel of Islam.

The Left is aiding this goal and unwittingly sowing the seeds of its own destruction, along with the destruction of a free West. Pray that God grants us the vision to see and the wisdom to act so that this unholy alliance never bears fruit.

3 thoughts on “The Left and Islamofascism: A Strange and Troubling Alliance, Part Three”