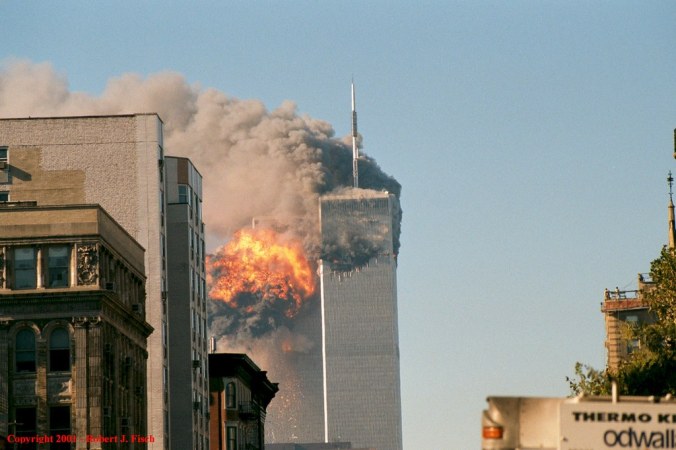 Those who were of the age of perhaps 8 or 9 and up at the time can probably remember where they were on the Tuesday morning of September 11, 2001, when the first plane crashed into the North Tower of the World Trade Center in New York. I was considerably older at that time and I precisely recall where I was when I heard the news.

I was in my office at the First Baptist Church when I heard the unbelievable over the radio. I rushed home and spent the rest of the day in front of the television watching the horrible scenes unfold.

The attacks on New York were followed by another plane crashing into the Pentagon building, and another terrorist attempt on United Airlines flight 93 that was foiled by valiant passengers who gave their lives in defense of others.

I also vividly remember the reaction of America and much of the world in the aftermath of those horrendous attacks. The united expression of rage and resolve coalesced around two words, NEVER FORGET!

How has the nation fared in keeping the vows so sincerely given 18 years ago? In many ways, it appears we are forgetting to ” never forget” 9/11.

To be clear, America has not completely forgotten who the enemy is and the danger they present. However, I fear we have been moving rapidly in that direction.

By comparison, ask if in 2001 there would have been hundreds of Muslims around America running for Congressional offices in the next election. Moreover, could a member of Congress have had the temerity to proudly state that she represents the Palestinians?

Or could blatantly anti-Semitic statements on the floor of Congress by a Muslim Congresswoman not be specifically condemned 18 years ago? Could the wholesale promotion of the anti-Israel Boycott, Divestment, and Sanctions [BDS] policy be seen on Capitol Hill in 2001 as it is today?

What about the current aspirations of the Muslim community in America? They are ambitious and I daresay would have been unthinkable in 2001.

For example, note the enthusiasm of fellow Muslim Rep. Andre Carson [D. IN].

During a speech at a welcoming event hosted by CAIR, the Council on American-Islamic Relations, he said, “It’s more than just about having three Muslims in Congress… I won’t rest until 2020 we have five more members of Congress; 2022 and 24 we have 10 more Muslims in Congress. In 2030 we may have about 30, 35 Muslims in Congress.” He went on to name the heights of Muslim ambition in the United States,  “…we could be saying Speaker of the House Ilhan, Speaker of the House Rashida, Senator Rashida, Governor Ilhan, President Fatima, Vice President Aziza. Inshallah (Allah willing).”

It should be mentioned that the reactions to the 9/11 attacks didn’t stop at the borders of America. Nations around the globe joined in solidarity with sympathetic gestures, prayers and many individuals in tears over the reports of the Islamic terrorism which took the lives of over 3,000 people.

However, the interim of almost two decades has also radically changed the tune of many of those same nations, especially those from the continent of Europe. In 2001, it would have been unimaginable to most that London would have a Muslim mayor, and that Germany would be housing hundreds of thousands of Islamic migrants to the detriment of their citizenry, and in recent years have agreed to take in thousands more.

Of course, we should also not forget that there were enemies of America who rejoiced at the heinous attacks of 9/11. A celebration of Palestinians dancing in the streets after the attacks was recorded by an AP reporter, but has never been released after threats from terror groups and Palestinian officials.

Here are the facts, all of which are matters of public record. On the afternoon of Sept. 11, 2001, thousands of jubilant Palestinians took to the streets, chanting “God is great,” firing automatic weapons and handing out sweets to passers-by. The largest demonstration took place in Nablus in the West Bank, where some 3,000 marchers danced and cheered as guerrillas fired assault rifles and grenades into the air. Many journalists were on the scene, but they were forcibly detained in a hotel by armed Palestinian security forces to prevent coverage of the rally. One cameraman — a freelance AP reporter — nevertheless managed to film some of the celebration. …The next day, members of Tanzim, the military arm of Fatah, physically threatened the cameraman and warned AP not to air the material. A cabinet secretary for the Palestinian government told the Associated Press that the government could not “guarantee the life” of the cameraman if the film were broadcast.

One of the iconic images from the aftermath of 9/11 was an impromptu event symbolizing American unity as a free nation to combat the forces of terrorism arrayed against us. The leaders of the House of Representatives and the Senate along with most of the members gathered before the press on the steps of the Capitol building. After speaking and a moment of silence, someone in the group began singing “God Bless America,” and everyone else joined in to make a beautiful, patriotic chorus as depicted in this rather blurry video.

However, in 2019, any American unity against Islamic radicalism seems like a nostalgic wish from antiquity. In fact, unity on almost any issue in America is virtually impossible.

Even the suggestion of a unified spirit of patriotism in America is dismissed by Leftists as “nationalist” and therefore their conception of the essence of evil. Patriotic unity against Jihadists is being characterized as ‘racism’ or a close substitute term like ‘white nationalist’ by the Left today.

Liberty is also being increasingly forgotten in our time since 9/11/2001. This is seen with increasing fervor in the social media arena.

The Left’s influence in this area has consistently attempted to silence those who disagree with Islamists, branding them as ‘Islamophobic.’ This has emboldened the Jihadists online to advance their cause even more especially with legions of Twitter and Facebook users adoringly following Muslim members of Congress.

In 2019, the Left is an amalgamation of various ‘identity’ groups that includes radical Muslims as a favored minority in America. The situation ‘across the pond’ for essential liberty is far worse as Muslims are swiftly on the way to becoming the majority group in large European nations.

One of the inevitable after-effects of that development is the alarming rise in the very real violence and crime in areas of Muslim power such as “no-go zones.” Take these recent examples from the Socialist ‘paradise’ of Sweden which is being colonized by Muslims.

“Due to a lack of police officers, several no-go ‘vulnerable areas’ in Sweden have been forced to hire security guards in an effort to combat crime and violence.” It’s no mystery why there is a lack of police officers. Three years ago, Jihad Watch reported that 80% of Swedish police were considering quitting their jobs because of the dangers posed by Muslim migrants, and it has gotten much worse.

The United States could face the same reality of the influx and influence of Muslim communities. It is how one Representative Tlaib [D. MI] could even be elected to Congress and then accomplish recently meeting with anti-Semitic Jihadists in Dallas, Texas.

Rep. Rashida Tliab (D., MICH.) recently met with a controversial pro-Palestinian organization that has encourage violence against Isreal, justified the use of terrorism against the Jewish state, and has called for the kidnapping of Israeli soldiers, according to onliine postings on social media. Tlaib, who has been under fire for her  hatred of Israel and support for the anti-Semitic Boycott, Divestment, and Sanctions movement was pictured meeting with members of the Palestine Youth Movement during the Arab Texas Festival held recently in Dallas. The PYM organization is known for its vitriolic rhetoric against Insraelis and Jews and has been caught in the past glorifying the leaders of anti-Semitic terrorist organizations.

Forgetting our unity and liberty as Americans is a horrendous error in the face of the threat which struck with such force on September 11,2001. However, it would be far worse if the nation continued to forget the Christian faith and values which formed the foundation for our republic.

Cross-like beam from North Tower of WTC found two days after 9/11. Now at the WTC Museum.

The most fundamental forgetting we are experiencing is the importance of America’s roots in Christian faith and values. That’s because this is a battle which strikes at the soul of the nation.

The importance and influence of Christianity upon America’s founding cannot be emphasized enough, as has been noted in this journal on numerous occasions. From the roots of the Christian faith and values which they inculcate has grown the greatest, most prosperous and freest nation ever known to humankind.

Full disclosure requires mentioning that the denigration of Christian faith and its values had been occurring in America and the western world for quite some time before 9/11/2001. It is likely this has served to weaken the foundations of the nation before the full expression of Jihadists hatred was unleashed on that morning 18 years ago.

It is good and right that we have days of remembrance for events of such importance to civilization both in the United States and worldwide. However, it is foolish to forget the danger that is still present in our midst.

Instead, we must cling with renewed intensity to the unity, liberty, Christian faith, and values which stand as foundational supports for our blessed America. Only then can we recognize and combat the enemy both without and within our hearts and homes.

Finally, as followers of Jesus, we must engage in the fight on the spiritual plane and enlist the aid of our LORD in the battle against the Islamic hordes of modern times. We must call upon our God for true and lasting victory.

For though we walk in the flesh, we are not waging war according to the flesh. For the weapons of our warfare are not of the flesh but have divine power to destroy strongholds. 2 Corinthians 10:3-4 [ESV]